Coach Blake is all about growing the game. He is also a local man, and was once a team member of the Kennard-Dale Golf Team. He started golfing as a very young boy and knew that was his calling at a young age. Later, he attended Keiser University in Florida for their Golf Management program. Upon graduation Blake worked at a variety of industry positions such as Golfsmith in Timonium MD, Hayfields Country Club in Hunt Valley, and then landed with Genesis Golf wearing a variety of hats.

Blake was involved with our Golf Trips division helping to customize golf trips for golfers throughout the Mid-Atlantic, while also aiding our development of our indoor golf division. Blake was here from the start, and every step of the way since then. In March of 2019 Blake took a full-time PGA apprentice position with Lancaster Country Club to continue developing his golf expertise. He continues to be committed to helping our community grow their love of the game and is a valued and key member of our team!   Note, Blake’s availability in the “in season” are limited, with availability changing each week except for typically Mondays. 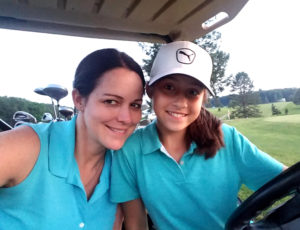 Kim Carl continues to be a tomboy at heart, having played just about every sport and outdoor activity a girl could imagine. However, golf wasn’t one of them, despite her mother’s passion for the game and introduction. After some maturing, Kim became interested in the game for business purposes with some fellow girlfriends. That was the start, but golf became more central in her life after marrying her husband Jeff, an avid golfer since age 10.  In 2004, Kim launched Genesis Golf Trips and has been growing her game little by little each year since.

Her experience with youth and heart for kids began in 2008, when Kim became an assistant basketball coach for her daughter’s team. She thereafter she has coached each year since through 2016.  In 2008 Kim also joined the children’s ministry team at Grace Fellowship Shrewsbury and transitioned to youth (teens) in 2009, knowing she found her calling. She continued with the youth ministry team through 2013, but continues to this day to maintain contact with those with whom she developed a mentoring relationship. Just this year she joined the Fellowship of Christian Athletes York County Board in an effort to grow discipleship in middle and high schools throughout the county. The Genesis Golf4Kids program concept is in honor of her Mother’s memory and rejoicing in her passion for a game that all ages can play. Kim is also a Board member for the York County Junior Golf Association.

Thanks for signing up!